Research based on examination of the faunal remains (bones) from ancient sites in Turkmenistan and Persia and genetic marker analysis of blood from breeds of horses around the world have shown that the Turkoman and Caspian are ancestral to all”hotblood” and Oriental breeds of horses.
By: Louise L. Firouz
Presented at the First International Conference onTurkoman Horses
Ashgabat, Turkmenistan, May 1998

According to Dr. Sander Bokonyi, the late, well-known and respected Hungarian archaeozoologist, the introduction of the ‘Turkoman’ from Central Asia and northern Persia was the catalyst for the development of Europe’s better breeds ofhorses from 4·000 B.c. onwards. The Caspian and Turkoman are the only pure forms of the original types of the native horse. The Yabou, another indigenous breed, has a higher percentage shared marker than any of the others, but a detailed analysis of the range of the horse has yet to be published (or unknown to the author).

According to Dr. E. Gus Cothran, a leader in the field of equine genetics and analysis of DNA and gene markers (University of Kentucky), research on blood samples taken from Caspians and Turkomans indicates these two are ancestral to ALL forms of the Oriental horse as is also the Yabou.

The Caspian, a miniature horse once native to Turkmenistan and Persia, was rediscovered in northern Iran near the Caspian Sea in 1965 (Firouz). Turkoman horses used for blood analysis were Akhal Tekes imported into the U.S. from Russia (Turkmenistan stud farms), mainly from Phil Case’s Akhal Teke Stud in Virginia, and Turkomans from the Firouz Turkoman Stud near Gonbad-e-Gabous near the horder Vv’ith Turkmenistan and belonging to other pri.vate breeders on the Turkoman steppes in north Iran. Some of the Iranian Turkomans had Akhal Teke blood from stallions imported from Russia and Turkmenistan.

Blood samples from the Yabou were taken in the province of Golestan, northeas tern Iran bordering Turkmenistan. Horses were from 20 villages on the forested northern slopes of the Alborz. Blood samples were taken by Dr. Farshad Maloufi and horses selected by Louise Firouz. 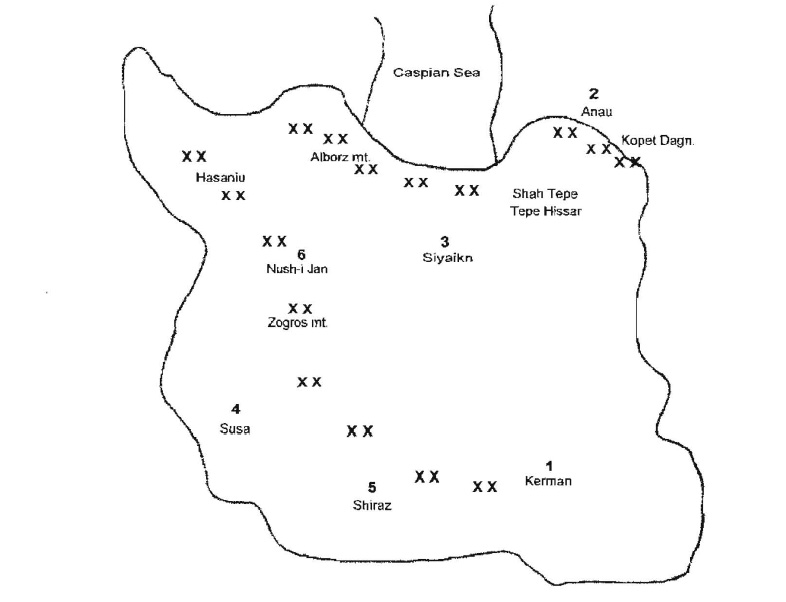 2. Anau, Turkmenistan (Kopet Dagh) 4000 B.c.; “We can now summarize the characteristics of the Anau horse in the following terms; while its dental system shows certain characters, leaning closely to those of the fossil Siberian horse- characters which according to certain authors belong only to the group of Occidental horses – it shows on the other hand, characters which belong to the purely Oriental horse gl·oup. In the characteristics of the extremities, also in common with a small percentage of the fossil Siberian horses, it ranges itself wholly on the side of the group distinguished as altogetber Oriental horses.

We can, therefore, consider the Anau domestic horse as an altogether Oriental horse resembling the Siberian equine only in the structure of the teeth. The Anau horse, is, therefore. the oldest domestic Oriental horse. I designate it, in distinction from other forms of subfossil horses, by the race or subspecies name Equus caballus pumpelli Duerst. It is, however, difficult to say to what extent this subfossil horse resembles the equine from Maragha which Wi1ckens from the data of a few incisors and molars has named Equus fossilus persicus.”

3. Siyalkh 5000 RC., Shah Tepe, Tepe Hissar. “Nothing exceptional was noted (in Siyalkh) in the ex.amination of the Fauna by R. Vaufrey ex.cept the discovery in the horse and camel are concerned, it
recalls the evidence long ago adduced from remains in the early levels at Anau.” (p.4’60). “In Anau I we may detect links with Siyalkh I and V and Y.M. Masson has convincingly demonstrated the links between Anau II, IIII, Siyalkh III and Hissar IB through IIA.” (pA:,61)s

Siyalkh II of Equus caballus Pumpelli Duerst (p. 455).” “The Shah Tepe diagnosis of domestication or variety is therefore provisional, but as far as characters which belong to the purely Oriental horse group. In the characteristics of the extremities, also in common with a small percentage of the fossil Siberian horses, it ranges itself wholly on the side of the group distinguished as altogether Oriental horses.

4. Susa, Khuzestan (ancient Elam, 3rd millennium R.C. “The native equid of Mesopotamia and Syria in period (early 3rd millennium RC) was E. h.emionus hemionus, the smallest and lightest of the equids. There is some evidence, however, that E. hemionus onager, a somewhat larger subspecies, usually classified as native to Iran, also occurred in the area. There is also evidence for two other species, E. asinus africanus, the true ass and E. caballus caballus, the domestic horse, which appears to have been introduced from outside.” (p23)

4. Mesopotamia. “The earliest illustrations of riders in the Akkadian Period show, asses or half-ass (onagers), then from the Ur III Period onwards horses become more common as mounts.”

4. Mesopotamia. “Dr. P.R.S. Moorey has recently established the identity of a ridden animal on terracotta relief plaques of early 2nd millennium RC. Mesopotamia as a true, if very small, Equus caballus, the presence of this species in this region at so early a date has, until now, often been seriously doubted. Also quite recently, a distinct strain of small-pony-sized-horse (of 1.20 m or under at the withers) has been identified in Iran (Firouz).

The slenderness index of its metapodials (One of the most commonly used criteria for determining equid species) has been found to fall within that of the hemiones. Hence, it seems possible that some remains of harness animals of the late Srd or early 2nd millennium B.C hitherto dismissed as those of onager may actually have belonged to a true, if very small, Equus cabalius.,,6 (Mary Littauer says Onager are now known never to have been domesticated and must be eliminated from Moorey’s paper. Private communication.)

5. Of the cultures of the later 1st millennium RC it is the Achamaenian that displays, perhaps significantly, the greatest and most offIcial interest in the small pony (although accidents of survival must never be discounted). Small ponies appear on a trilingual seal of one of the Dariuses, pulling the king’s chariot in a hunting scene. They also appear on the Apadana reliefs at Persepolis although here brought as empire tribute. Several coins of Phoenicia under Persian rule show very small teams pulling an important personage in a Persian type of chariot. These ponies look like relatives ofthose on the royal seal already mentioned. These are all coarser animals, with heavier heads and bodies than any of those thus far cited. The four small ponies of the Oxus Treasure from the other end of the empire, share the head characteristics of the coin and seal animals. One may ask whether these new attributes were produced by crossing a small native Iranian animal with the “Great Nisaean” of Central Asiatic provenance, or whether the latter’s conformation became so much the fashionable ideal that it was indiscriminately conferred by the artists on other strains as well.”

6. Nush-i-Jan. “The case of the horses was quite different from that of the other domestic animals. Most of the horses belonged to a group with a withers of an average height of 135 – 137 em., but there were also remains of miniature horses. Their identification was not simple, since both fell into the size variation of the onager also found at the site; nevertheless, they could be identified on the basis of their enamel patterns. The size and proportions of the mandible fragment perfectly correspond to those of the jaw ofa recent Caspian miniature horse. These three finds from Nush-i-Jan are good evidence for the existence of miniature horses in Median times, and at the same time, they verify the artistic representations of these horses in the ancient Near East. However, their occurrence raises further questions:

I) Did these miniature horses represent an independent breed in those times, or were they only extremely small variants of a very variable population?

Despite potential difficulties, in general gene marker analysis of horse breeds gives very reasonable dendograms based upon what is known historically. There are six major branches with the Oriental type horses forming a distinct cluster in the center of Tree L Within the Oriental cluster those breeds which are true Arabian breeds form a tight group with the Kurd and Akhal Teke on the outside of this cluster. The Caspian is the base breed in a subcluster that includes the Yabou and the Turkoman. This group represents the most primitive (ancestral) breeds of the Oriental cluster and the Caspian has the most primitive position of these three breeds. 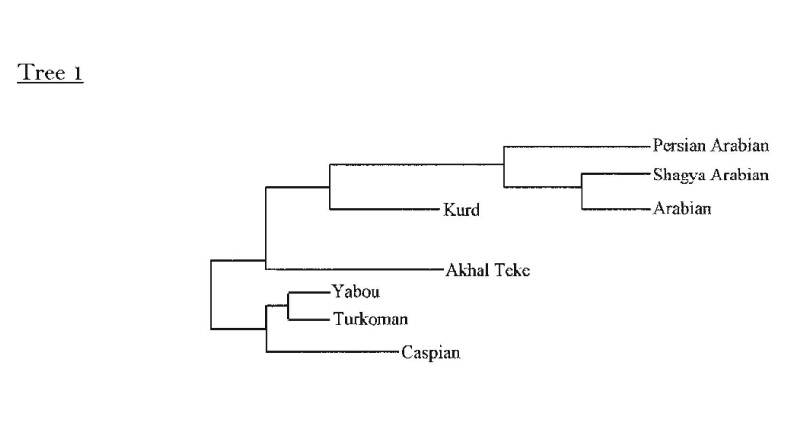 Tree 2. Again the Oriental breeds form a distinct cluster and the two Caspian populations occupy the
ancestral position within this cluster’. 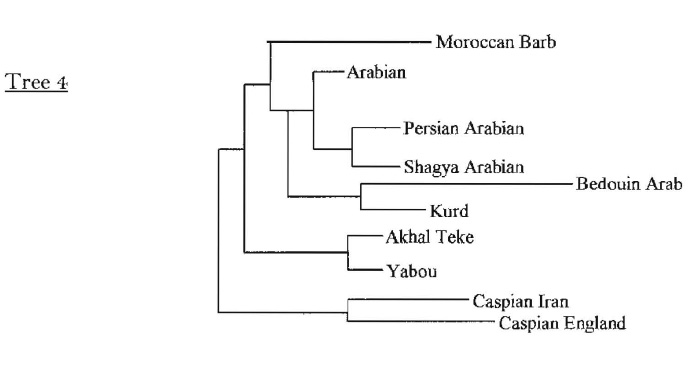 There is evidence that a small (miniature) horse has existed in what is now known as Iran from at least the 4th millennium E.c. to the present. II Osteological, graphic and genetic evidence all combine to paint a picture of a unique, small, E. caballus whose influence on the development of the Oriental horse has been instrumental in determining its unique characteristics, There is also evidence that the Turkoman existed in southwest Central Asia and northern Iran, spreading rapidly both South of the Kopet Dagh and west of the Caspian Sea in early pre-history with strong influences to the east. While the Caspian is the base breed for the Oriental horse, it is through the Turkoman that the large horse has spread.

The Turkoman continued to exert a primary influence on breeds in eastern Europe and the Middle East up to the present day. The strong presence of the Caspian (Eguusfossilus persicus) is seen genetically through the derivative Oriental breeds (see chart).