Research into the history and origin of this elegant horse proved the ancient lineage of the Caspian. It was identified, as a royal breed previously thought long extinct.
Through examination and research of ancient Persian archaeological remains, along with blood type, bone structure and genetic testing, the Caspian was found to be the forerunner of Persia’s native wild horses.

It was used to develop the ancient Arabian by the Mesopotamians in the 3rd millennium BC. Identification of the Caspian was aided by several of its unique features such as its blood hemoglobin composition and its skeletal structure.

The rediscovery of the Caspian and the archaeological and scientific research it inspired have offered solid and convincing proof of the origin of the hot blooded, Near Eastern horse. As Louise Firouz states, “Iran’s position at the crossroads of the earliest human in migrations with the lush pastures of the Elburz and Zagros mountains and plentiful water, put her in the unique position of having all the natural elements for being the first to selectively breed horses for different uses and specific characteristics.

” With findings from cave diggings made in Iran in 1949, Carleton Coon discovered remains, which proved that the horse was in Iran in the Mesolithic period.

This finding refuted the previously held belief that horses were not native to Iran, but were introduced by Indo-Europeans in the 3rd or early 2nd millennium BC.

Small wild horses roamed the district of Persia around Kermanshah, now known as Bakhatran, in west central Iran. The most common theory of the horse’s presence around Kermanshah is that many species were swept southward before glaciers, re-treating to warmer climates.

After the glaciers melted, many species returned to their former northern habitats, but some remained within fixed geographical areas forming isolated breeding groups with distinctive genetic characteristics. This would account for the very early isolated pocket of Caspians in ancient Persia in the Zagros near Kermanshah.

Timotheas of Gaza, writing in the 6th century AD, stated that a small breed of horse was then being raised in the area of Kermanshah: “The horses of the Medes are of moderate size with small ears and heads unlike those of a horse.”

The typical, ancient large horse to which he would have compared this breed was substantially smaller than an average sized modem horse, and was Roman-nosed. This horse of moderate size would have been a small horse with a head unlike the Roman-nosed Nisaean horse, in other words, a small, dish-headed horse, the Caspian.

So the Caspian found refuge in the Elburz Mountains at the southern Caspian sea-shore. The preservation and purity of the breed was due to this fortunate circumstance. In the intervening centuries, the small Caspian horse ran wild or was captured and bred as a workhorse in this remote mountainous region. Local villagers referred to these horses as “Mouleki” or “Pouseki”.

Upon her discovery and survey of the Caspians in the region, Louise Firouz com-mented: “That they are so distinctively peculiar to one small region leads one to believe that they were systematically bred for a purpose at one time. Their remarkable characteristics come through so clearly that they are probably throw-backs to a strongly dominant breed.” Archaeology can help understand the purpose for which the Caspian was systematically bred as a pureblood breed.

Research has demonstrated that the Caspian is depicted in ancient Persian statuettes, friezes and writings going back to 3000 BC. The most famous artifacts are the stone frieze on the eastern staircase of the Palace of Persepolis (the “Lydian Horses”); the trilingual seal of King Darius the Great (possessed by the British Museum); and the Gold Oxus Treasure of Darabgird, which depicts four tiny horses pulling a ceremonial chariot, dating back to the sixth or fifth century BC.

King Darius I, of the Achaemenid dynasty established in Persia by Cyrus the Great of biblical fame, came to power in 550 BC. The seal of King Darius the Great is of particular interest. The small horses pictured have several of the physical characteristics of the Caspian – slim legs, concave faces and small ears. 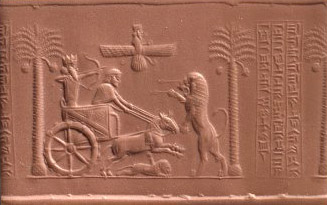 As a public ritual demonstration of their fitness to rule, Persian Kings killed captured lions, which were brought into amphitheaters and released. At this event, which the seal of King Darius portrays, the small size of the horses pulling the chariot is worthy of note. The idea horses were purposely down sized for special considerations on the seal, or for stylized artistic interpretation, has been refuted. The horses necessarily were small for fast maneuvering at high speeds in a confined space. For this particular ceremony, Caspians would have been the premier choice due to their acceleration, small size and agility. Such characteristics were highly prized by King Darius and his royal successors.

The later, Sasanid dynasty, maintained the Old Zoroastrian order with its ancient royal investiture ceremonies. The rock relieve at Naqsh-e-Rostam in Iran, which depicts the 224 AD investiture of Ardashir 1, the first Sasanid king, shows the king on a small horse with slim legs and small ears. Though he is mounted, the king’s feet are almost touching the ground.

The last king of the Sasanid dynasty was Yazdegerd III. He was defeated by the followers in Islam at the battle of al-Qadisiyah on the Euphrates River in 637 AD. This was not long after Timotheus of Gaza, quoted above. This Arab invasion made a break with the Persian Zoroastrian past and traditions, which had included a prominent place for the Caspian horse. The new Islamic rulers had no use for the royal investiture ceremonies. Their authority was derived from the Caliph, rather than from a dynasty that had ritually to prove its prowess in chariots drawn by Caspians.

So from 3,000 BC to 637 AD, there is a historical continuity for the small, refined pre-Archamaenian horse. After that there were doubtless some records or inventories made of the horses in Persia, but the great libraries succumbed to repeated raids and invasions by the Moslems and the Mongols over the centuries. In this way the fate of the royal horse became a mystery for over 1300 years.